Find out everything you need to know about Mike! 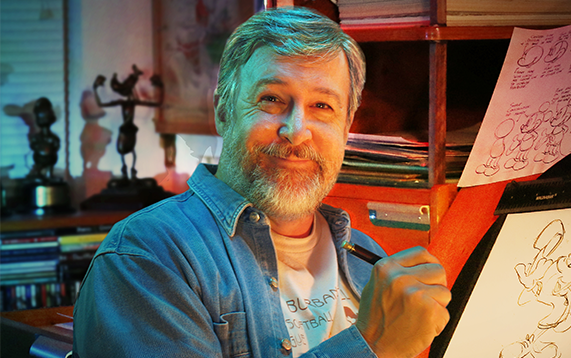 Mike Peraza is an award-winning designer with 45 years of experience creating magic for Walt Disney Studios, Walt Disney Television, Walt Disney Comics, Walt Disney Imagineering, Lucasfilm, Hanna-Barbera, FOX Studios, MGM, Sony and Universal Studios. He has worked with legendary film makers such as Tim Burton (classmates at CalArts), Steven Spielberg and George Lucas and 8 of the 9 Old Men. From working as Art Director for Disney’s “The Little Mermaid” on the big screen or designing “DuckTales” for the small screen, Mr. Peraza’s talents have helped shape the animation world, and usher in the fabled Disney Renaissance.

Born and raised in New Orleans, Mike knew he wanted to be an artist from an early age. His animation work for a local TV station solidified this dream. He set out west in 1973 to attend California Institute for the Arts, a university Walt Disney himself established. During his frequent visits to the Walt Disney Studio, he was offered a position in the new development program by Eric Larson. He turned down the offer but returned to CalArts a couple of years later at the invitation of Jack Hannah, Dean of the new Disney Character Animation Program. Through the Disney family’s generosity, Mike was given a full scholarship. He grew to know each Disney instructor on a 1 to 1 relationship as the Teachers Aid. At the end of the year, students showed their work to an audience including Ron Miller, Lillian Disney, Diane Disney, Frank Thomas, Ollie Johnson, Ward Kimball, Woolie Reitherman and other animation notables. Afterwards Mike found a note on his locker inviting him to come and work for The Walt Disney Studios.

Mike went on to have a key hand in the concepts of animated features for film, TV and games including projects such as: Fox and the Hound, Mickey’s Christmas Carol, The Black Cauldron, The Great Mouse Detective, TRON, The Little Mermaid, Return to OZ, Gummi Bears, Ducktales, Chip and Dale, Rescue Rangers, Talespin, Goof Troop, Darkwing Duck, Who Framed Roger Rabbit, Aladdin, Beauty and the Beast, Return to OZ, Return to Neverland, Stuart Little, Junglebook 2, Tarzan 2, Alice in Wonderland and others. Mr Peraza’s recent assignments for Walt Disney Imagineering include CARSLAND, New Fantasyland, Shanghai Disney Resort, and PIXAR Pier. Among awards Mike has received over the years are the Friz Freleng Award, The Lifetime Achievement Award by AFF, and The Disneyana Legend Award. He is a voting member of the Televsion Academy and donates his time and money to Epilepsy Research in the hopes of someday finding a cure for children and parents