Find out everything you need to know about Patty! 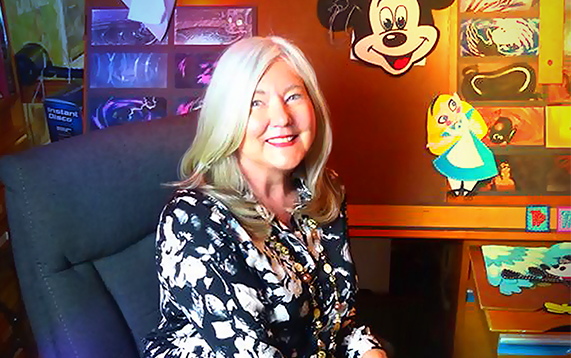 She realized a love of creating artwork at an early age and took multiple art classes in high school, including signing up as the first female allowed in the drafting class. The instructor refused her entry to the all male class. Fortunately the principle knew her from the honor society and realized her goal of going on to art school, overiding the instructors denial.

Made the Deans List while attending the University of Delaware as a graphic design major. It was there that the Dean informed her about the Disney Animation program at California Institute of the Arts. She applied was accepted and made the move to California. Patty was fortunate to receive a scholarship from the Disney family to attend the college. While there she was taught by Disney Legends Jack Hannah, Ken O’Connor, Elmer Plummer, T Hee and design expert Bill Moore.

Patty has the distinction of being the first female hired by the Walt Disney Studio from Cal Arts. Her first assignment was working on the motorcycles for the original motion picture Tron. From there she inbetweened on features along with various Epcot projects which resulted with being promoted to breakdown, then assistant animator. One of her early opportunities to animate came on Mickey’s Christmas Carol. She was still classified as an assistant animator but enjoyed animating cigar puffs from Pete, whispy snow gusts, candle flame lighting by Jimminy and much more. Along with many of the top animators at the studio she was asked to help with the big push to get EPCOT ready for its opening. She was also assigned to animate all effects single handedly for Meet The World for Tokyo Disneyland. These were animated on 3 Cinemascope fields! When Ron Miller viewed her animation of the earthquakes, volcanic eruption and storms forming the island of Japan, he imediately promoted Patty to full animator. She became the first female effects animator at the Walt Disney Studios and at that time the only female animator in both the character and effects animation department.

She also was able to animate on other full length animated features including The Black Cauldron and The Great Mouse Detective. Patty was then asked by Disney management to serve as project lead for a newly proposed film based on the traditional story Beauty and the Beast working closely with Don Hahn and Mel Shaw. In addition to features she animated effects for television commercials for Disney with Glenn Keane doing the character. She also animated effects for live action features including Bill and Teds Excellent Adventure and Warlock. Patty animated effects for Dale Baer Studio, Film Roman and Warner Brothers. While raising a family, Patty somehow found time to work on numerous television and direct to video projects including Ducktales, Talespin, Garfield, Tom and Jerry, Rover Dangerfield, and Proud Family. She currently creates “Art for the Park” with original creations sold at Disneyland Art Gallery and throughout the Disney company